As I have been researching and studying about Armenia I was interested to find out when the evangelical ministry started up. The information was scarce but I came across a website for the Armenian Evangelical Christian Baptist Church. The About Us page is the history of the baptists in Armenia, it is written by Asatur Nahapetyan who gathered information on this subject from many differenct sources and summarized it for us.

Rather then copy the information I recommend you read it for yourself on the Armenian Evangelical Christian Baptist Church website.

Armenia is a mountainous country in Eurasia, which stands landlocked between the Black Sea and the Caspian Sea in the Southern Caucasus. Its stands bordered by Turkey in the west, Georgia in the north, Azerbaijan in the east and Iran and the Nakhchivan exclave of Azerbaijan in the south.

The country was once a republic of the Soviet Union, but today it has transformed itself into a unitary, multiparty, democratic nation-state. Constitutionally a secular state, Armenia still depends a lot upon the Christian faith in relation to the history and identification of its people. It has an ancient and historic
cultural heritage, visible in the form of the various monuments that adorn its landscape.

I don’t know the number of times while growing up that I would say, “Armenia” and the question back would be “Romania?” Or I would say I’m Armenian and they would think I had said Romanian. It was frustrating. Then the 1988 earthquake suddenly brought Armenia to the forefront of the news people now knew about Armenia but like any small country the average person does not know where to find Armenia on the map or any significant history about the country.

So, my friends who know I’m Armenian but don’t know much about Armenia here are thousands of years worth of history summarized into a couple of paragraphs.
﻿

Yerevan (Armenian: Երևան or Երեւան, Armenian pronunciation: [jɛɾɛˈvɑn]) is the capital and largest city of Armenia and one of the world’s oldest continuously-inhabited cities. Situated along the Hrazdan River, Yerevan is the administrative, cultural, and industrial center of the country. It has been the capital since 1918, the thirteenth in the history of Armenia.

The history of Yerevan dates back to the 8th century BC, with the founding of the fortress of Erebuni in 782 BC by king Argishti I at the western extreme of the Ararat plain. After World War I, Yerevan became the capital of the Democratic Republic of Armenia as thousands of survivors of the Armenian Genocide settled in the area. The city expanded rapidly during the 20th century as Armenia became one of the fifteen republics in the Soviet Union. In fifty years, Yerevan was transformed from a town of a few thousand residents within the Russian Empire, to Armenia’s principal cultural, artistic, and industrial center, as well as becoming the seat of national government.

With the growth of the economy of the country, Yerevan has been undergoing major transformation as many parts of the city have been the recipient of new construction since the early 2000s, and retail outlets such as restaurants, shops and street cafes, which were rare during Soviet times, have multiplied.

Yerevan was named the 2012 World Book Capital by UNESCO.Taken from Wikipedia 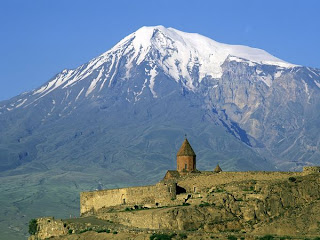 One of the world’s oldest civilization, Armenia once included Mount Ararat, which biblical tradition identifies as the mountain that Noah’s ark rested on after the flood. It was the first country in the world to officially embrace Christianity as its religion (c. 300).﻿
The national flag of the Republic of Armenia is of three colors in stripes of the same width – red, blue, orange respectively from top to bottom. The Red emblematizes the Armenian Highland, the Armenian people’s continued struggle for survival, maintenance of the Christian faith, Armenia’s independence and freedom. The Blue emblematizes the will of the people of Armenia to live beneath peaceful skies. The Orange emblematizes the creative talent and hard-working nature of the people of Armenia.

Over the centuries Armenia was conquered by Greeks, Romans, Persians, Byzantines, Mongols, Arabs, Ottoman Turks, and Russian. From the 17th century through World War I major portions of Armenia were controlled by their most brutal invader, the Ottoman Turks, under whom they experienced discrimination, religious persecution, heavy taxation, and armed attacks. In response to Armenian nationalist stirrings, the Turks massacred thousands of Armenians in 1894 and 1896. The most horrific massacre took place in April 1915 during World War I, when the Turks ordered the deportation of the Armenian population to the deserts of Syria and Mesopotamia. According to the majority of historians, between 600,000 and 1.5 million Armenians were murdered or died of starvation. The Armenian massacre is considered the first genocide in the 20th century. Turkey denies that a genocide took place, and claims that a much smaller number died in a civil war.

In two weeks we will be in Armenia starting our 11 day missions trip.

Dad has been planning for this trip since the beginning of the year when on a whim he mentioned he would love to go back to visit the folks that we have been supporting individually and as a church and that he would do it if I were to go along. This conversation took place about a week after I was let go from work due to restructuring, I had been there for more then five years. I left the home of my parents wondering if this was something that my dad had just said in passing or was serious.

Several hours later after thinking about our conversation I called my dad and asked him if he was serious. Sure enough he was and wanted to book the trip right away. I had a moment of panic as all kinds of ‘what ifs’ and questions flew through my mind.

Within 48 hours I had booked our flights and the hotel that we were staying at. Yes folks, my dad moves even faster then I do when he sets his mind to it. I’m not that far behind.

For months dad has been talking about this trip, unfortunately I have been so busy with a new business that I have started that it just didn’t sink in that I was going on this trip. That is, until this past week. BAM!!! What? Only two weeks to set things in order for me to be away from my business, my kids, my…. never mind because I realize that God is in control. Ha! What’s the worst that could happen? Kids don’t have food to eat? Not going to happen my kids have survival instincts don’t forget their mom used to work crazy long hours and these poor kids had to fend for themselves. Who are we kidding they are Hovsepians and they are therefore survivors.

After the response to my status about our impending trip on facebook yesterday I thought that a blog might be a better way to communicate to those who want to follow us on this trip.

The hotel we are staying at has internet and a business center. I will be taking a mini-hp with me and hopefully will be able to work from my room if not I will try the business center. God willing I will post as often as possible while we are there.