Our next stop was Vagharshapat, 18 km west of Yerevan, better known as Ejmiatsin in Eastern Armenian and Echmiadzin in Western Armenian, to an Armenian this is their spiritual center, the Catholicos of All Armenians. Echmiadzin is the Armenian equivalent of the Vatican.

The compound houses the Cathedral, a printing house, a seminary, a museum, tombs, a display of katchkars, dorms for the priests, and much more.

﻿By late afternoon we were back at Arayik’s home and had a late lunch. After a short rest dad headed to a local printer with Arayik to discuss the printing of the Eastern Armenian tracks locally. A later post will have more information and details about this.

I stayed behind and had a wonderful visit with Nelli and her sister Lili. In a short time the 3 of us have bonded and were able to share experiences and talk openly about difficulties we had been through and how God was always there to help us.
Arayik and Nelli’s daughter, Leia, has been singing folk songs in an ensemble since the age of 12, at the time she was the youngest. She invited me to join her at a folk song concert in downtown Yerevan. I was interested in going because I’ve never had exposure to our Armenian songs and music. I was not disappointed. It was a colorful event.
As much as I enjoyed the entertainment on stage I was also enjoying what was happening around me. At one point a dozen spectators were up and dancing traditional dances and then there were a group of young soldiers up in the balconies dancing as well. All in all it was a fun way to wrap up a busy day. 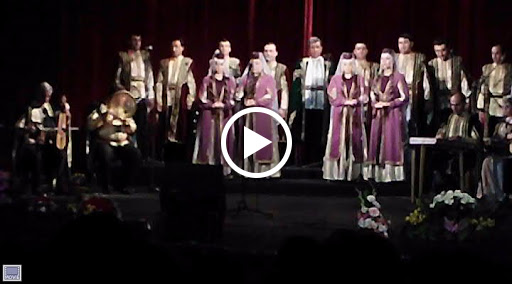