Late on Wednesday, August 29 (mid-morning in Armenia), Pastor Joseph and Jessie connected with Ann-Margret on Skype. They looked happy and well-rested and are enjoying their stay at a small hotel (10 rooms) where they are the only guests at the moment. The weather has been beautiful and warm, 38-40 Celsius, thankfully there is air-conditioning.

Here is an update on what has been happening since they arrived in Armenia:
Day 1 – Saturday, August 25
In a previous post we posted pictures and a few words about the baptismal service but were missing the details of the day. The plan had been for 25 new believers to be baptised on Saturday. On the day of the baptism there were many obstacles that prevented about half the group to not be baptised.
As always in Armenia there is the issue of transportation, this time it prevented a few from making it to the baptismal service. Several others decided not be baptised due to the influence and pressure from others discouraging them from doing so.
On the day of the baptism as they were preparing for the service, a man walking by, stopped and questioned the group as to what was going on. When it was explained to him, he began to curse and say there was only one true church – it turns out he is the local priest.
Even with all the obstacles no one was able to stop the baptismal service from taking place. There is much need for prayer for Armenia and the believers, in the name of Christianity many are being persecuted.
Day 2 – Sunday, August 26
Pastor Joseph spoke at the Armenian Brotherhood Church of Yerevan (ABC), if you would like to listen to his sermon (in Armenian) click here.
After the church service, Pastor Joseph and Jessie had a very lovely lunch with old family friends, from Montreal who are also visiting Armenia, and the Pastor of ABC and his family. Knowing all them it must have been a time of laughter and great conversation. 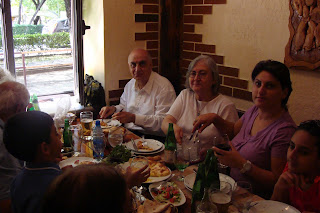 Pastor Joseph and Jessie have had the opportunity to spent time visiting with family, friends and new believers. We will hear more about these visits when they return and we will fill you in as well.
One of those visits was with a woman named Emma, a television reporter who was given a copy of God’s Workshop in Armenian a few months ago. When she started reading the book she contacted Pastor Joseph and started corresponding by email with him. She was interested and excited to meet face-to-face with Pastor Joseph while he was in Armenia. They met and Pastor Joseph and Jessie were able to share with her about the Lord. She was very encouraged by the visit.

Day 6 – Thursday, August 30
Pastor Joseph and Artur Mantashyan, the man who was instrumental in the translation of God’s Workshop into Armenian, went to the bookstore of the largest charismatic church
where they will be selling the Pastor Joseph’s book, in Eastern Armenian. 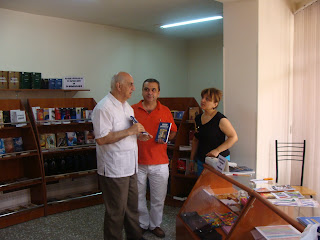 Pastor Joseph then went to the Campus Crusade headquarters and met the International
Director from France (Hovhannes) who is an Iranian Armenian and was good friends with Joseph Hovsepian’s father Rev. Haik Hovsepian (read more about Rev. Haik Hovsepian here).


Other news and updates:
﻿﻿﻿﻿
The receptionist (Hripsime) at the hotel that Pastor Joseph and Jessie are staying in is a born-again believer. She and the rest of the hotel staff have all received copies of the tract What Are You Searching for? This young woman told Pastor Joseph that she had sensed he was a Christian because of three things: He said “God bless you” to her, he wore a cross lapel pin and she had heard him and Jessie praying together.

To see the rest of the trip itinerary please click here.

We appreciate your continued prayers and support for this amazing work God is doing in Armenia. God bless you!