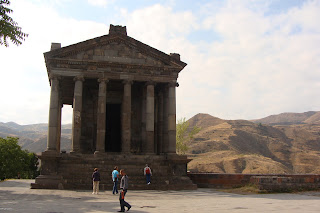 We continued on to visit Garni Temple about 32 km south-east of Yerevan. The Garni Temple is a pagan temple used even to this date by those who still follow the pagan rituals of their ancestors who were Zoroastrians. 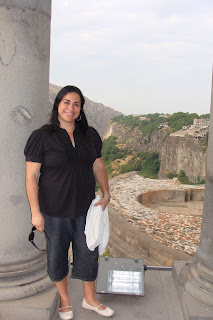 Outside the temple gates vendors are selling their wares. One of those is Arlet, dad met her in 2008 during his first vist. She and her daughter Anahid live right across of the gates to the Garni Temple and are Gregorian Orthodox.
They invited us in for coffee and a visit. They have a beautiful ‘akey’ garden in Armenian. Anahid is a professor of Economics and when she is not teaching in the university she helps her mother harvest the fruits of the trees in their garden and make homemade breads and jams to sell to tourists and visitors to the Garni Temple. 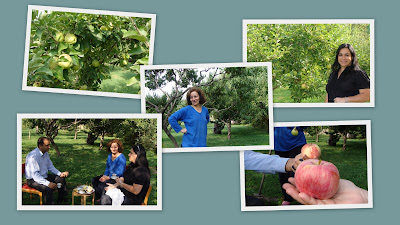 Our next stop in Garni was at a restaurant for tourists run by Mr. X you would never know this place was here unless you went with a local. The land once belonged to his grandfather and his father built the house that the family lives in today. They have a great set-up, there is fresh sturgeon brought in and live in a large tank, you can pick the one you want and they will cook it for you. they also have a demonstration of how ‘lavash’ used to be baked.
Here’s dad enjoying lavash wrapped around a handful of fresh parsely.
Mr. X has worked hard to make this a place that tour groups will want to stop at and recommend, unfortunately he has been approached on many occasions with threats and being told to sell and leave. He is a threat to other businesses. He recently received a fine that is approximately $30,000 CAD an impossible amount for him to come up with. He is waiting to go to court to fight the fine but he knows that he it is in vain. This is not an isolated situation there are many more stories that can be told of corruption in Armenia.
I walked away with angry tears, not being able to speak. This should not be allowed. We take too much for granted in North America.
In 2008, dad met Artur an amazing artist and his home was our next stop. This time his wife Anahid and son Narik were there as well. We arrived as they were seating for lunch. Anahid quickly brought plates and cutlery for us. It is amazing at how hospitable Armenians are. They want to share what little they have.
Artur’s home is filled with his art work. I had such a difficult time dragging my eyes away from his paintings. They belong in a museum I cannot begin to describe his work. He paints landscapes, animals, still life and people.
Narik, Artur’s son, is 15 years and is the Armenian heavy weight boxing champion for his age group. He recently placed third in Europe. He is training for another event in Russia in one month’s time. He was such a humble and quiet young man.
Our last stop of the day was in Jora to visit Arayik’s cousin’s family. His family members are unbelievers. They were open to hear the Word of God and to take a tract each.
His cousin’s son Krikor (25 years old) has accepted Christ as his Saviour and had been given a New Testament. He needs our prayers, after coming back from serving in the Army he went to Russia to work and certain events caused mental disturbances.
Arayik gave him one of the Bible’s we bought the week before and asked to take a picture of him holding the Bible.
Their daughter’s father-in-law was there with one of his grandchildren, his story is a sad one. His wife died three months ago after a horrible car accident at the age of 46. She left behind 3 sons (ages 26, 24 & 21), 2 daughters-in-law and four grandchildren. The man, also named Krikor, needs our prayers. As most families in Armenia many generations live together, in his case all his sons, their wives and children live with him. He is a soft spoken man who you could see loved his grandchild very much.
While we were there a neighbour came by to visit. She is a believer and has been baptized but had a very angry look on her face. Arayik asked her why she looked so angry. She sighed and replied ‘I’m tired.’ He kept at her telling her that as a believer she should smile and rejoice. She would smile and then her face slipped back to that angry look.
As we were leaving she asked if she too could have a Bible. Well, will wonders never cease the change in this woman was instantaneous. She was grinning from ear-to-ear and singing praises at the top of her voice. This is what our trip is all about. 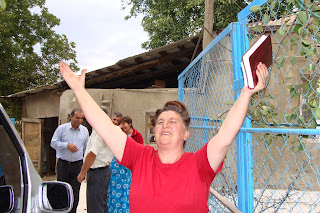